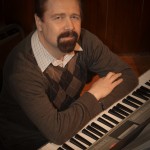 Montreal born, Toronto and London (England) trained, Michael Leach is a pianist, organist, musical director and choral conductor of long standing who has performed widely in Canada, the United States, England, France and Italy. In the world of Musical Theatre and Dance, he has directed the music and played for more than 170 different productions.  As a pianist for  dance, Michael has worked with, amongst many others, The National Ballet of Canada, Toronto Dance Theatre, Les Grands Ballets, Les Ballets Jazz, American Ballet Theatre, The Milton Myers Dance Company, The Martha Graham School of Contemporary Dance, and Tanztheater Wuppertal Pina Bausch. As an organist, Michael maintains a position of Organist and Director of Music at an uptown Toronto church and is a published composer of sacred choral music. Michael has been a member of the Faculty of Fine Arts, Department of Dance, since 1983.