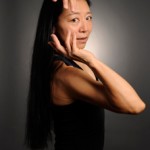 A “Masterful choreographer” (Globe and Mail), Keiko Kitano is an independent dance artist with a unique style influenced by her study of Butoh and Japanese dance. She has been a guest artist at numerous festivals, has worked with many artists in Tokyo and abroad. In 2001, she co-founded The Tokyo Dance Collective along with multimedia artist Rick Thomson and composer TAMURAN Music, with the aim of unifying dance, music and multimedia by creating new interactive pieces for dance, media, and music.

A resident of Toronto since 2003, Keiko has collaborated with many local artists such as Parmela Attariwara, Aki Takahashi, Nagata-Shachu, Rick Thomson and others, as well as international artists such as TAMURAN Music and costume designer Shingo Tokihiro. Her choreography has been presented at various venues and festivals. As a dancer, she has worked with many local choreographers including Holly Small, Sashar Zarif, Susan Cash, Maxine Heppner, Viv Moore, and Emily Cheung.

Keiko always enjoys working with artists from different disciplines and cultural backgrounds yet with similar sensibilities. Her interests are in forms of Japanese dance and Butoh both for study and dance  creation. She holds a Master’s degree in Dance, was a full-time faculty for the Japan Women’s College of Physical Education (Dance Major 1991 – 2003) teaching Modern Dance Technique, Improvisation and other various disciplines associated with modern dance. Since 2006, Keiko has been a part-time faculty for the Department of Dance at York University and continues to create and perform around the Toronto area.

She has been excited to be a part of Toronto’s “First Impression Campaign” and looks forward to her upcoming projects in March 2011  with her new solo piece for the Green Tea Collective, a group she co-founded.