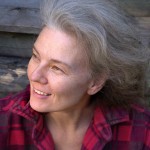 Holly Small is an award-winning dance artist and educator with a longstanding passion for interdisciplinary collaboration. Many of her works combine dance, live music, video and interactive new media. Her choreography, described as “a flawless integration of music and dance” (Globe & Mail, Toronto), has been presented throughout Canada, the US, UK, Europe and Asia.

Radiant, her critically acclaimed collaboration with Toronto composer/media artist John Oswald and Quebec designer Emile Morin received four Dora Award nominations for outstanding choreography, music, performance and production. Other collaborations include In the Letters of My Name, with Azerbaijani performer Sashar Zarif, which won the 2006 Paula Citron Award; Night Vision: Nyx and Draw a Bicycle, two interactive dance and video works with Don Sinclair; Vermillion Arc, a work for gamelan-playing dancers that she choreographed and composed with Nur Intan Murtadza; and 1 of 12 Solos commissioned by the Toronto Dance Theatre.

Professor Small’s monumental collaborative work, Souls, a full-length piece for 46 performers ranging in age from 10 to 71, co-produced with the Canadian Children’s Dance Theatre, was named “one of the year’s 10 best” dance productions of 2001 by both The Globe and Mail and NOW Magazine. Also on the “year’s 10 best” lists was the equally ambitious cadaver exquis / exquisite corpse, co-created with composer John Oswald and 22 renowned Canadian and international choreographers including Margie Gillis, Bill T. Jones and James Kudelka.

Small’s work has been featured in a wide variety of settings including the Canada Dance Festival in Ottawa, Dance Theatre Workshop in New York, the Newfoundland Sound Symposium, the Angelica Music Festival in Bologna, Italy, Vancouver’s Women in View festival, the Winnipeg New Music Festival, and dance:made in canada, DanceWorks Mainstage Series, Nuit Blanche,  to name just a few Toronto venues.  She continues to perform as a dancer and sometimes as an actor, vocalist and musician.  She appeared in the one-woman play cette petite chose with Quebec City’s Recto-Verso theatre company and has been a guest artist with REAson d’etre Dance, da Collision Dance, Kaeja d’Dance and Toronto Dance Theatre, among others.

Professor Small has taught dance across Canada, throughout China, in Los Angeles and England.  A member of the faculty in York University’s Department of Dance for 24 years, she is a core faculty member for the MFA program in Choreography and Dance Dramaturgy, teaches a wide range of subjects in the BFA program.  She has frequently directed and choreographed for the York Dance Ensemble and has toured with them to Vancouver, Montreal and throughout Ontario and New Brunswick. She has received many honours for her work, including the UCLA Woman of the Year Award, a Millennium Award, a Chalmers Award, the Paula Citron Award and numerous grants from arts councils and foundations.  Publications include chapters in This Passion (edited by Carol Anderson) and Canadian Dance Visions and Stories (edited by Selma Odom & Mary Jane Warner) as well as articles for the Dance Umbrella of Ontario’s website, Local Heroes.